Today's article is a bit of a highlight on a very special moveset. Water Gun + Hydro Pump is devestatingly powerful as Water Gun's quick cooldown (allowing you to dodge) and solid damage output make it possibly the best attacking move in the game. Water Gun also gets to hit so many things for neutral or super effective damage. Unlike its siblings Bite and Dragon Breath, Water Gun is often paired with the fantastic move Hydro Pump, which gives Vaporeon any Pokemon with this moveset the ability to really hammer it home against Water-weak Pokemon.

But this article isn't titled "Vaporeon is good" for a reason! There are a number of Pokemon in the game with this fantastic moveset, and the idea behind today's article is to highlight these Pokemon specifically for gym-building purposes. The moveset is fantastic, the only question that remains is who should you use to raise a friendly gym's prestige, and in what situation(s)? That's what we'll be discussing today.

Why should I care about this article? I have a 2000+ CP Vaporeon that wrecks everything.

Well dear internet-goer, I'm glad you asked! I'll be writing Gym-battling and Gym-building guides soon enough, but in the meantime, here is a helpful tip:


The following list arbitrarily ranks Water Gun + Hydro Pump users based on how useful they are for levelling up gyms. Hold on to variable CP versions of these Pokemon, especially near the top of the list:

Yes, I even put Wartortle in there. Know why? Because I have a 678 CP Seadra that I use to earn prestige off of random ~1000CP Pokemon people leave in gyms (e.g. Magmar, Scyther). Seadra also tackles ~1300CP Flareons just fine, because... Water Gun + Hydro Pump. And guess what? Wartortle's base stats are comparable to Seadra's (trading attack for defence). So as pathetic as it seems, Seadra is about as good as Wartortle, and even Seadra can be useful, so Wartortle too can be useful for the trainer looking for some middling CP Pokemon to battle with.

The reason Blastoise is so low is because it is too rare, and has too high a CP for most people to just have a weak one sitting around. Most people evolve only their strongest Wartortle, which means their Blastoise might as well just be a worse Vaporeon. At least people might still have their first 800-1500 CP Vaporeon named Rainer that they mistakenly evolved early in the game.

While any of these Pokemon suffice to beat rogue Fire types etc..., I'll go through the list and highlight some of its members that stand out for one reason or another. But just to make it clear, if you want a Pokemon to use for this prestige-earning strategy, any of the above Pokemon are a worthwhile consideration.


Given that this strategy is meant to deal damage as quickly as possible (and dodge charge moves), you may opt for saying "screw the rules, I have base attack!" If this approach is for you, here are the Pokemon you'll want to use to take down an opposing higher-CP Pokemon, in order of Attack stat.

As you can see, Golduck and Starmie sit atop the list, but most of the others aren't really that far behind. The one Pokemon I wouldn't recommend for this approach is Wartortle, but you could probably have guessed that Blastoise would be much better than Wartortle at this. But it's good to know about Wartortle, as it's likely going to be your lowest-CP Pokemon randomly sitting in your box.

Between Golduck and Starmie, choose Golduck. Golduck has far better defences, largely thanks to its Stamina. Vaporeon is obviously the ideal Water Gun user, but having a Vaporeon at just the right CP for grinding purposes can be tough; especially if the Pokemon you want to grind off of is in the low 1000's.

Type-advantages you can make the most of


As I mentioned, you can beat more than just Water-weak Pokemon with Water Gun + Hydro Pump. Sure, the CP difference you can achieve gets smaller, but you'll still be able to earn over 500 prestige per battle if you're trading with an opponent neutrally. So, what Pokemon on this list have typing niches worth mentioning?

Starmie has pitiful Stamina, but its Defence is at least solid. This makes it a poor defending Pokemon, but when attacking you don't have to worry so much; just dodge! Psychic typing lets Starmie resist opposing Psychic and Fighting attacks. Few Pokemon use these attacks, but some Pokemon Starmie can grind off of include:

Any Pokemon with Water Gun + Hydro Pump should beat opposing Fire or Ground types, but Starmie uniquely gets to resist Pokemon with Fighting moves.

Omastar is actually an incredibly well-rounded Pokemon, and a great attacker. Its defence is great, and its Stamina is poor, but not pitiful. The important part is that Omastar is a Rock-type, which gives it a number of useful resistances including: Flying, Normal, Poison, and a double-resistance to Fire. The resistance to Poison and Normal are especially appreciated, while the double-resistance to Fire makes any Fire Pokemon a joke. Some strong defenders that Omastar can grind off of ideally include:


Charizard - No matter what moveset, Omastar works best since it doubly resists Fire, and it resists Wing Attack unlike other Water Gun users.
Muk - You could use a Psychic type to hit harder, but unlike most Psychic-type moves, Water Gun + Hydro Pump allows you to dodge. In this instance, the best offence is a good defence.
Nidoqueen - Resisting Poison Jab is really great for increasing the CP difference you can accomplish.
Nidoking - What she said ^
Snorlax - If you've ever used Vaporeon to beat a Snorlax, Omastar works similarly, it just resists Body Slam. If only Omastar weren't so rare...
Weezing - Same logic as Muk, except Weezing only gets Tackle as a quick move, and Omastar resists its Sludge Bomb to boot.

The one downside to Omastar is: it's exceedingly rare; not everyone has an Omastar at their disposal. Not only that, but its rarity also makes it unlikely that you have a Water Gun + Hydro Pump Omastar specifically (Only 1/6 of Omastar are Water Gun + Hydro Pump). But if you were one of the lucky ones to evolve this moveset, rejoice and go grind up your local gyms!

Just to emphasize my point: how good is Water Gun + Hydro Pump? Well...

The reason I could do that was because Water Gun + Hydro Pump is seriously that strong; it can beat two opposing higher-CP Water types. I even had enough HP left over that I'm confident Blastoise would have sufficed, and maybe even Golduck... maybe.

I'll also just say this again: any Pokemon with Water Gun + Hydro Pump will do! So look through your box and favourite any Pokemon you think is going to be useful. Like I said, I have a 678 CP Seadra that works just fine for this strategy. I could have a better Pokemon, but Seadra works just fine for me. It has a bit of trouble taking things twice its size on in a neutral battle, but it still destroys weak Fire types. So don't feel like Wartortle or Seadra are useless. Water Gun + Hydro Pump is seriously good enough to make them relevant. But if you can replace them later in their CP-tier with things like Golduck, that's probably for the best.

p.s. It is disguisting to think that Water Gun used to have Base 10 power instead of its current base 6.
Posted by Unknown at 08:47

An in-depth look at Gym Decay

Hey there Trainers! The other day I was wondering about gym decay rate, and was surprised to find that no one had figured out the exact fo... 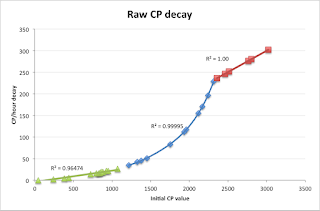